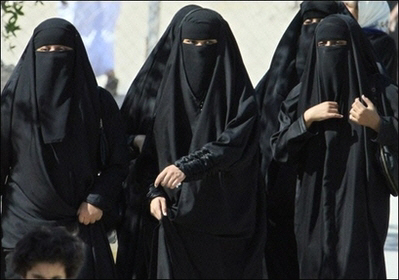 Islamic veils have become a flashpoint for European debates over integration, extremism and freedom of religion in recent years, with France the first to implement a nationwide burqa ban in April 2011.

In these ‘liberal democratic’ countries, it is only the Muslim women who are being fined for exercising their freedom of choice.

Denmark has become the latest European country to ban the burqa, the Danish law was passed in May 31st and came into effect Wednesday, August 1st, resulting to Hundreds of demonstrators gathered in the Danish capital of Copenhagen wearing burqas and face veils, saying the legislation oppresses some Muslim women and violates their rights.

In Denmark both the centre-right government and centre-left Social Democrat party voted in favour of the ban, passing the law 75 - 30.

Martin Henriksen, an MP from the Danish People's Party, which proposed the ban, said he was very pleased with the progress of the law. "The burqa and niqab are the purest form of extremism. This is a battle again fundamentalism. As a society, we are showing what we are willing to accept," he said.

"We believe this is an important step for our country and we hope it will inspire other countries to do the same. It is irreconcilable with Danish culture and values." He added that in the future his party also hoped to see the banning from schools of Islamic headscarves that leave the face visible.

Let’s take a look at the countries which have introduced the controversial law, and where Muslim women stand on wearing the veil across the world.

In 2011, France became the first country in Western Europe to ban face-covering garments like the burqa or niqab in public. They have also banned the burkini, a full-body swimsuit worn by some Muslim women.

President, Nicolas Sarkozy, whose administration brought in the ban, said that veils oppress women and were "not welcome" in France.

Some Muslim groups in Austria have criticised the ban. Carla Amina Bhagajati of the Islamic Religious Community in Austria said the “handful” of fully veiled women she knows of in Vienna “now are criminalized and... restricted to their homes.”

The ban will technically apply to all face-concealing headwear, including surgical masks, fancy dress and balaclavas worn in certain circumstances. But the intention of the legislation is to ban Islamic headdresses, prompting accusations of discrimination against Muslim women.

The ban is part of a raft of “integration” policies, that require migrants deemed to have a good chance of gaining asylum to attend courses on the German language, job applications and Austrian values, or have their benefits cut.

Austrian president Alexander Van der Bellen has publicly opposed the policy, telling school pupils: “It is every woman’s right to always dress how she wants.”

Muslim women found wearing a burqa and face veil could be subject to a €150 (£132) on-the-spot fine.

The law in Belgium that banned face-covering garments in public came into effect in 2011.

In its ruling, the court argued that Belgium had the right to consider this ban, however controversial, “necessary in a democratic society” – because it seeks to guarantee the conditions of “living together” and the “protection of the rights and freedoms of others. The court ruled that the ban was not a violation of the privacy principle or freedom of faith. It also ruled that the burqa made equal treatment of men and women more difficult in our society.

In December 2012, Belgium's Constitutional Court rejected appeals for the ban to be annulled, ruling that it did not violate human rights. Violators could be sentenced to seven days in prison and face a fine of €137 (£122).

In November 2016, Dutch MPs backed a ban on the Islamic full veil in public places such as schools and hospitals, and on public transport.

The niqab and the burka full-face veils were included in the ban along with face coverings such as ski-masks and helmets.

It was estimated there were between 200 and 400 burqa or niqab-wearing people in the Netherlands, out of a population of roughly 17 million.

Proponents of the law say it will improve safety by making people more easily identifiable. Far-right Freedom Party politician Geert Wilders, who has campaigned heavily for the ban, was quick to praise the decision.

"Finally, 13 years after a majority in the Dutch Parliament voted in favor of my motion to ban the burqa, it became law yesterday!" he said in a tweet, along with the hashtags #stopislam #deislamize #freedom

Bulgaria imposed the burqa ban in September 2016. Muslims make up about 12 percent of Bulgaria’s 7.2 million population and most belong to a centuries-old community, largely ethnic Turks.

In a statement, Amnesty International UK condemned the ban. John Dalhuisen, Europe Director of the human rights organisation, said: “Women in Bulgaria should be free to dress as they please and to wear the burqa or the niqab as an expression of their identity or beliefs. This ban violates their rights to freedom of expression and religion.

Jalal Faik, secretary general of local religious authority the Grand Mufti’s office said any such ban was about trying to make nationalist gains at the expense of Muslims. He told the BBC: “The far-right populist pseudo-patriotic factions are seeking to gain dirty [political] dividends on the back of Muslims, which is dishonourable given the scale of Islamophobia across the world.”

Women who break the law will face fines of up to £665, as well as a suspension of social security benefits.