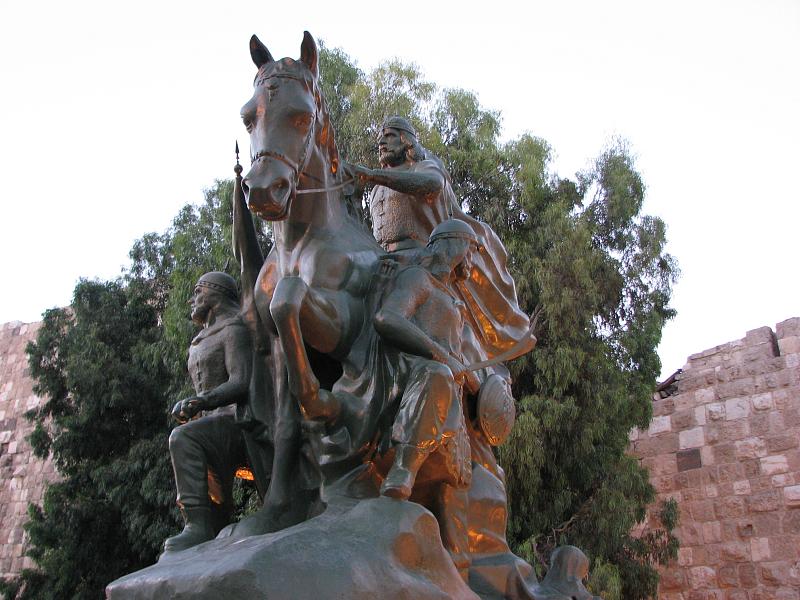 The leader was born of Kurdish parents in Takreet (in Iraq) in 1137 AD, he was a courageous and brilliant Muslim leader during the 12th century. He was an educated ruler as he studied the Quran and theology along with astronomy, mathematics, and law.

The Islamic world was at its worst state, politically and even morally however, he earned a name for himself in both Muslim and Western history after uniting Egypt and Syria. In just twelve years, he conquered Damascus, Aleppo, and Iraq. Above all, he played a crucial role in defeating the Crusaders by successfully reclaiming Jerusalem. His ultimate goal was to liberate Muslim lands from the Crusaders.

The brutality Muslims endured at the hands of the Crusaders

The Muslims lost Al Masjid Al Aqsa to the Crusaders in 1099AD and were the victims of one of the darkest and most bloody days in its history. When the Christians had seized Jerusalem during the very first Crusade, they carried out mass atrocities and killings, creating a bloodbath in which the Muslim residents were the prominent targets.  Muslims and Jews found themselves facing a common enemy – resulting in a large proportion of the Muslims fleeing to Al Masjid Al Aqsa in order to seek refuge. The Crusaders later entered the blessed Masjid and massacred thousands of Muslims inside. somewhere between 3,000 and 70,000 (most likely around 10,000) was butchered.

It was graphically documented in the PBS series Islam: Empire of Faith. In the words of the chronicler of Crusades, Raymond of Agiles, he described the massacre to be so extensive that the Crusaders “rode in blood up to their knees and bridle reins.”

Another statement by, Antoine Domit, professor of history at the Lebanese University says:

“Their entrance to the city [of Jerusalem] was horrifying. They started with an infamous massacre. They killed people in the streets, in their houses and in alleyways. Arab sources talk about a hundred thousand people slaughtered.”

Al Masjid Al Aqsa was then converted into a palace, and it took 88 years before the Muslims reclaimed it in 1187 under the leadership of the great leader Sallahudin Ayyubi.

It was only expected for the Crusaers to be tortured the same by the hands of Sallahudin however, in stark contrast, he stuck to the teachings of Islam and handled them with tolerance and respect. Although he was in the perfect position to seek revenge for his people, he chose to leave it to Allah. By doing so, he spared the lives of 100,000 Christians, guaranteed them a safe departure. They were granted a thoughtful forty days to prepare for departure.

Sallahudin Ayabbi did not allow a massacre of civilians or soldiers, and after reclaiming Al Masjid Al Aqsa he also used his own hands to clean the blessed land, and famously sprinkled rosewater through the Masjid.

The Muslims once again had unhindered control of Jerusalem and Al Masjid Al Aqsa for a significant period of time – approximately eight centuries – and their rule was characterized by peace, justice and prosperity, with Al Masjid Al Aqsa becoming a great centre of learning with scholars from all over the world travelling to study and teach within its blessed precincts. Throughout almost this entire period, the Christians and Jews were provided safety and protection, and their rights were respected as People of the Book.

Sallahudin’s scope of vision was that he gave each situation its due attention and weight, he was tactful. He never broke a rule of diplomacy or peace initiative with his competitors. The power or wealth he earned never spoiled him or made him greedy. Power and position meant little to him. And despite his advisor’s persistent request to keep some of the revenues he received from Egypt and Syria, he never kept any of it. When he died, his wealth was only few dinars.

Sallahudin died of a fever aged 57 on March 4, 1193, at Damascus. He had given most of his money away for charity, as was discovered after his death. He had founded numerous universities and hospitals, none of which were to be named for him. He is buried beside the Umayyad Mosque in Damascus, Syria.

Engraved on his tomb were the words: "Almighty God! Let his soul be acceptable to thee and open to him the gates of Paradise, that being the last conquest for which he hoped."

As we end this piece, let’s ponder on the statement he left for the world:

"If you want to destroy any nation without war, make adultery or nudity common in the young generation."

How sadly relatable is the statement for the state of our Ummah today? Share your thoughts.