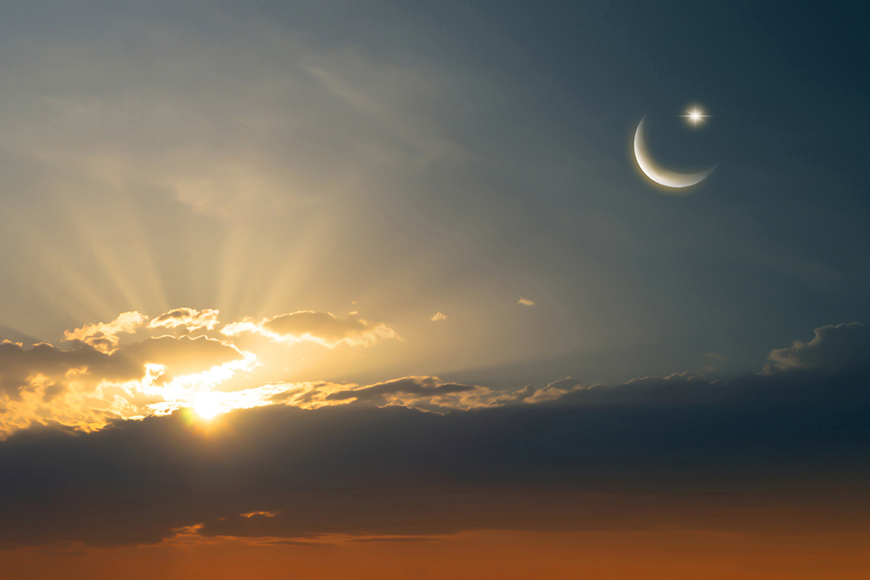 The Islamic Calendar depends on the movement of the moon. The beginning of each month is marked by the observance of a new moon seen for the first time. This years Islamic year is 1440 AH.

Firstly, what is Islamic New Year?

The Islamic New Year begins with the sighting of the new moon at sunset. Its arrival signals the beginning of the month of Muharram – one of the four holy months of the Islamic calendar.

Muharram is the second most holy month of the Islamic year, after Ramadan, its name meaning “forbidden”, many followers of the faith choosing to fast on its ninth and tenth days. Muḥarram includes ‘Āshūrā’, the tenth day.It begins with the sighting of the new moon at sunset, which occurs on the final day of Dhu al-Hijjah, the last month of the Islamic calendar.

What date it falls on depends on the lunar cycle, upon which the Islamic calendar is based.

Supposedly named thus because pre-Islamic Arab houses were empty this time of year while their occupants gathered food. Another account relates that they used to loot the houses of their enemies after defeating them in battle, leaving nothing behind.

Also means to graze, because cattle were grazed during this month. Also a very holy month of celebration for many Muslims, as it was the month the Prophet Muhammad was born.

Often considered the pre-Islamic summer. Jumādá may also be related to a verb meaning "to freeze" and another account relates that water would freeze during this time of year.

This is the second sacred month in which fighting is forbidden. Rajab may also be related to a verb meaning "to remove", so called because pre-Islamic Arabs would remove the heads of their spears and refrain from fighting.

Marked the time of year when Arab tribes dispersed to find water. Sha‘bān may also be related to a verb meaning "to be in between two things". Another account relates that it was called thus because the month lies between Rajab and Ramaḍān.

Burning is related to fasting as in empty stomach one's worldly desire will burn. Supposedly so called because of high temperatures caused by the excessive heat of the sun. Ramaḍān is the most venerated month of the Hijri calendar. During this time, Muslims must fast from pre-dawn till sunset and should give charity to the poor and needy.

She-camels would normally be in calf at this time of year and raise their tails.

This is a holy month during which war is banned. People are allowed to defend themselves if attacked.

During this month Muslim pilgrims from all around the world congregate at Mecca to visit the Kaaba. The Hajj is performed on the eighth, ninth and the tenth of this month. Day of Arafah takes place on the ninth of the month. Eid al-Adha, the "Festival of the Sacrifice", begins on the tenth day and ends on sunset of the twelfth, and during which war is banned.