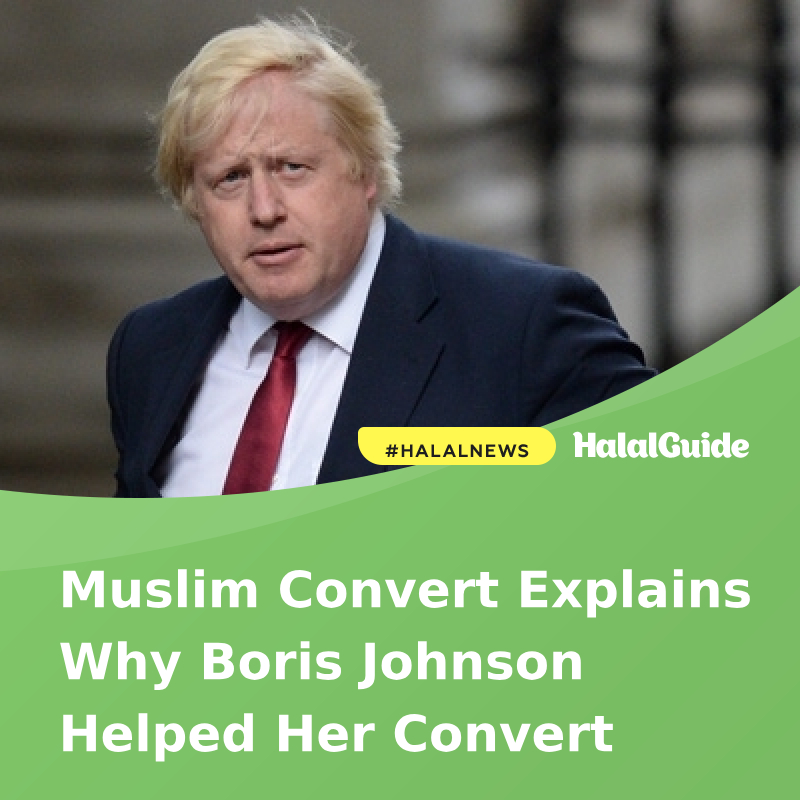 Speaking to HalalGuide, Stacy Tolman, a Manager at a Breakdown call based in Leeds, west Yorkshire, explained why she chose to convert to Islam after Boris Johnsons controversial comments.

Her area has a very large established Muslim community and grew up forming close friendships with Muslim girls at school and university who always embraced her as she was, she says, “I was always welcomed into their homes with open arms.”

She described her immense anger over Boris Johnsons controversial comments regarding the Burqa in which he arrogantly stated that Muslim women wearing burkas "look like letter boxes" and compared them to "bank robbers".

“I was angry at the hate been aimed at these innocent women going about their daily lives.” In a discussion with her close friends, one had called her an ‘honourable Muslim’ as light-hearted joke in response to the level of Stacey’s anger expressed. It was during this discussion and offhand comment that Stacey first thought of becoming a Muslim.

She explained of her past, “I was never really religious and have been through a very hard marriage break up, my actions caused my children to move to the US with their dad and my mum stopped talking to me for three years, though, we never had a great relationship anyway.”

As a first step, her friends mother suggested Stacey to experience wearing the burqa to which she felt excited to try, she wanted to experience the lifestyle in one and thought it will be the perfect time to do so in the midst of the anger and frustration post Boris Johnson’s vile comments.

Upon her first time trying the full burqa, she immediately felt different with mixed feelings; familiarity and safe. “The moment I wore the burka, I felt an overwhelming feeling of peace, I have never felt that way before, I was reduced to tears!”

It only took a week for Stacey to make the life changing decision of converting to Islam and declare the shahadah.She took to the local Imam at the local Islamic Cultural Centre for advice and guidance as she felt overwhelmed with mixed emotions, she revealed, “I had a long chat with a local Iman as my thoughts were taking over and I knew I had to act, he told me should consider reverting. It didn't take long for me to decide it was the right path. since then I have learnt I was more than right, reverting to Islam has given me a life and purpose, I am learning but I am 100% sure becoming Muslim has been the perfect thing to do. Allah put his hand out and now I feel wanted and cherished. I just needed him.”

"The beauty of Islam is its people and their character," Stacey emphasised. She explained this to be the biggest help during her journey to becoming a Muslim; the warmth of the Muslims and how they helped adjust to her new lifestyle.

“As always, the Muslim community have welcomed me with open arms and made me feel so welcome, I feel myself just wanting to learn so much all the time. I feel Islam chose me, drew me in, called me.”

Her colleagues at work have also supported her choice with positivity, she operates 12 hours a day and therefore, anticipated what sort of atmosphere she would need to start working in after they observe her change, but to her relief, they showed great interest and appreciation to her new identity, “My work have been fantastic as it’s very multicultural, so in its nature very accepting anyway.”

In regard to her former lifestyle, Stacey says, “I don't miss anything, I feel Allah has rescued me from a life of self-destruction and too much alcohol, life was lived around a partying. At times life got difficult, I was a very heavy social drinker.”

She shared her favourite and most comforting excerpt from the tenth verse of chapter 14 (Sūrat Ib'rāhīm):

‘He invites you that He may forgive you of your sins.’

She continued, “Over years, I have made lots of mistakes. Mistakes that had cost me lots of friends and family. I was never religious and at some points in life, I was rude and nasty. Wearing the burqa and being embraced by the Muslim community felt like there was a helping hand and life didn't need to be hard. It’s all to become a better person.”

Stacey hopes to continue gaining a deeper knowledge of Islam and aspires to become a fluent Arabic speaker. What began as anger from the Islamophobic remarks about the burka by Boris Johnson, it has led Stacey Tolman to begin a purposeful journey as a Muslim convert.

What a plot twist!